Family History: A Love for Aviation

MaMa tells me that I come by my love of all things that fly naturally.  My Grandpa is a private pilot and could spend hour upon hours in any aviation museum (MaMa says she's experienced it first hand).  My Great Grandfather was a pilot as well, he flew in World War II.  It runs even deeper in the family lineage - my Great Grandfather's Uncle, Emile Lussier received a Distinguished Flying Cross during World War I.  Lussier's daughter, Betty, became a pilot as well and has authored two books on her life experiences and her times as a World War II spy. 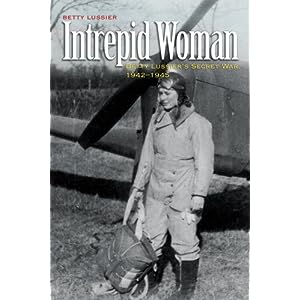 Here's an article that was written about her a few years back:

Years before any bra was burned in protest, Betty Lussier starred in her own female liberation movement. Fueled less by politics and more by innate talent, Lussier boldly crossed gender lines throughout her life--first as a pilot, then as a World War II spy and later as a farmer in Morocco.

Amid these chapters of daring, she also found time to marry a Spaniard, raise four boys and live in an elegant apartment in Madrid, with Ava Gardner as her friend and neighbor and Prince Rainier and Grace Kelly among the guests she entertained.

Lussier, still robust at 83, moved to the Palisades four years ago.

The die was cast for a life of adventure on a dairy farm in Maryland where Lussier grew up with her three sisters. Lussier's father, a decorated WWI pilot, moved the family there from Canada, sharing the hard work of the farm with his young daughters, all of whom became champion swimmers and big achievers.

"I built a boat with my dad when I was only 12," Lussier recalled during a recent interview in her home in the El Medio Bluffs neighborhood. At 16, she learned to fly a family friend's Piper Cub, thus initiating a lifelong love affair with flying.

"Those Lussier Girls Should Have Been Boys" reads the headline from a 1943 Baltimore newspaper article. The piece highlighted how Betty Lussier's mother was holding things together on the farm while her daughters, all grown except one, and husband were scattered around the world contributing to the war.

That year Betty, at 21, had won her wings in the British Air Transport Auxiliary. Two years earlier, she had interviewed as a potential recruit, but lacked sufficient flying hours.

"I just felt I had to go," Lussier recalls of her teenaged zeal to aid a troubled Europe, even before the U.S. entered the war. "I had a firm idea that this was going to be a big threat to the world, but a lot of people didn't see it."
A determined Lussier withdrew from the University of Maryland, worked the midnight shift at the Martin aircraft plant and used all the money she earned to get flying hours.


You can read her first book online for free, Amid My Alien Corn.  Her second book, Intrepid Woman

is available by clicking here