Farming Back In The Day

Recently an article ran in the Whitman County Gazette about the tramways that many farmers in our region used in the late 1800s to get their grains to the Snake River where they'd be loaded on a boat and shipped to their final destination. 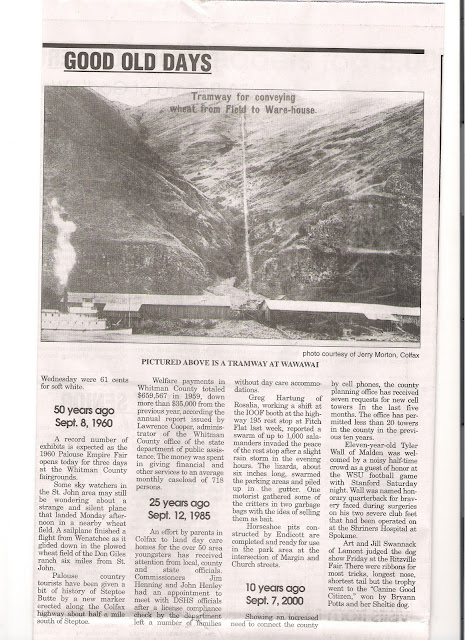 Today, the grains that we don't sell to you, our loyal customers, we market through the more traditional way.  We sell them to a broker for a market price, we then truck the grains to the river where they are loaded onto barges and shipped down river and often across the ocean.  We can do this because of two great improvements:  (1) roads and grades that provide our trucks access to the river and (2) a series of Dams along the Snake and Columbia Rivers that allow large barges carrying the grain to make their way downstream.  Both of these weren't available to the farmers of our region back in the day.

In the late 1800s Grain Chutes, Bucket Tramways, and Rail Tramways all provided alternative transportation means for getting the farmer's grain to the river. Each of these methods were effective in transporting grain into the river canyon. 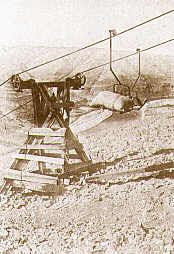 This is an example of one of the pylons and what they called a grain bucket that carried the sacks of grain down a 2,000 foot decent from the cliffs above down to the Snake River below.  They work similar to a ski lift, only in reverse.  They were run using gravity and the weight of each of the sacks of grain.  We're told that the workers used to ride down to the river in the morning and back up at night on these small platforms.  What a ride that must've been!  I doubt that would've been acceptable by today's work place standards. 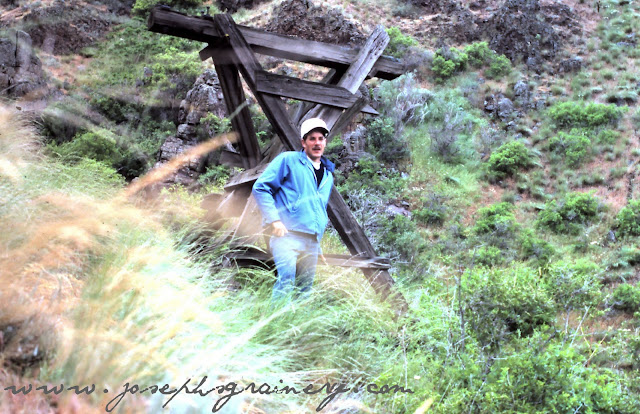 This photo is of my Grandpa Bill, was taken 30 some years ago, along the banks of the Snake River with one of the pylons that most likely would've carried the grains that our ancestors grew and harvested.  Grandpa tells me that these pylons were burned in a fire about 15 years ago.

Once the grains made it to the river, they were loaded onto steamboats and carried down the Snake River, along the Columbia River . 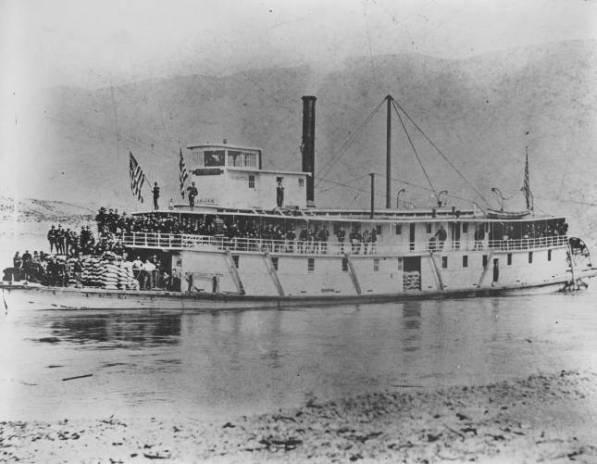 This photo shows the Steamboat Almota loaded with troops during the Spanish American War of 1898, notice the sacks of grain on the front.

We've only skimmed the surface of this topic, if you're interested in learning more about the Tramways, you can read this article  written by Deanna Noland.