Do you need to serve a small army, but don't have much time?  This is definitely the dish for you!  We followed the recipe pretty closely as it said it would serve four, and figured that would be enough for DaDa, MaMa and I, with enough left over for DaDa's lunch the next day, right?  Try left overs enough for the next five or six lunches.  It's the pasta dish that could feed 5,000!  OK, maybe that's an exaggeration, but it sure made a bunch of pasta.  Not only did it produce a week's worth of lunches for DaDa, it also tasted delicious, so he won't mind having to eat it for lunch every day this week.  :)  MaMa did the math and she says it's a pretty economical way to feed a large family (being realistic, it would probably feed 6 to 8, maybe even 10 if you added a side dish or two). 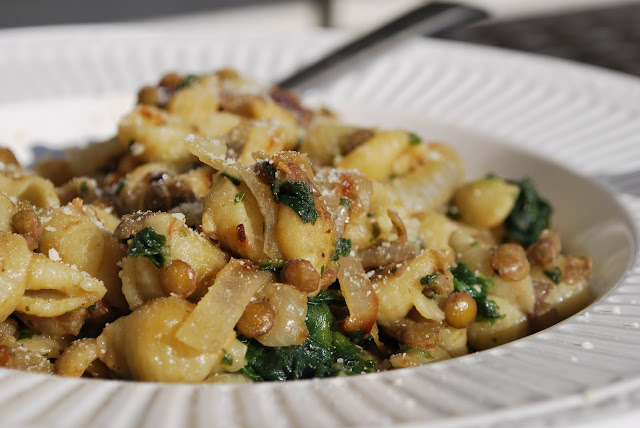 Directions:  Bring a large pot of water to boil (for the pasta).  In a small saucepan, cover the lentils with an inch of water, bring to a boil, then reduce heat, cover and simmer for 20 minutes.

Pour oil into a large skillet over medium heat.  Add the onions, garlic, salt and pepper.  Reduce to medium low heat, cover and let cook until the onions are very soft, about 20 minutes.

Once the water in the large pot is boiling, toss in the pasta.  Cook the pasta, following the directions on the box.  Once the pasta is cook, set aside a cup of the pasta water, then drain the pasta in a colander.

Return the pasta to the large pot and combine with the onion mixutre, cooked lentils and spinach.  Toss well.  If it appears to be dry, you can add a bit of the reserved pasta water, if not, serve by topping with the parmesan cheese, as well as salt and pepper to taste. 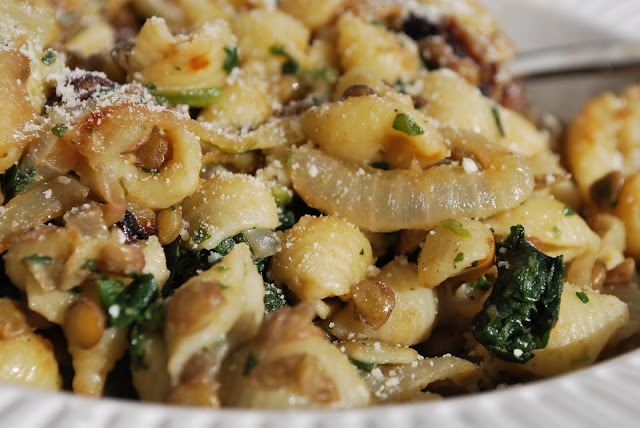 A special thanks to MaMa's friend Michelle for sharing this great recipe with us!