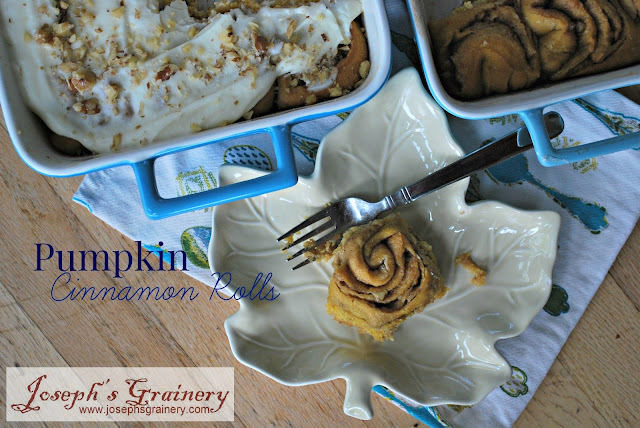 Changing colors, falling leaves and Pumpkin Cinnamon Rolls, oh my!  What you don't see in this photo is that these D-elicious (yes, with a capital D) cinnamon rolls were almost gone before I could snap a photo.  We decided to whole grain-ify the Pioneer Woman's Pumpkin Cinnamon Roll recipe and boy were we glad we tried them!

So here's our adapted whole wheat version of her dreamy pumpkin cinnamon rolls...

In a large saucepan, combine 1 1/2 cups  milk, 1/2 vegetable oil, and 1/2 cup sugar. Heat until hot but not boiling, then remove the pan from the stove and allow it to cool until the mixture is warm to the touch but not too hot. Sprinkle the yeast over the surface of the liquid and allow to sit for 5 minutes. Stir in pumpkin puree until combined.

Combine 4 cups of flour with 1/2 teaspoon cinnamon, 1/4 teaspoon nutmeg, and 1/4 teaspoon ginger. Sprinkle it into the saucepan and stir until it just comes together. Cover the saucepan with a dish towel and set in a warm place for 1 hour.

After an hour, the mixture should be very puffy and at least doubled in size. Stir in 1/2 cup flour, baking soda, baking powder, and salt until totally combined.

Preheat the oven to 375 degrees. Drizzle butter into 3 pie pans (or a larger baking dish) and smear it all over the bottom of the pans. Turn out dough onto a floured surface and press it into a rectangular shape.  Flour a rolling pin and roll the dough into a large rectangle about 10 inches by 30 inches.

Drizzle the melted 1 stick of butter over the dough. Mix together 1/2 cup sugar, 1/2 cup brown sugar, and the cinnamon, nutmeg, and ginger. Sprinkle this all over the surface of the dough, covering all the melted butter. Sprinkle with 1/2 cup to 3/4 cup chopped pecans (or walnuts, in our case).

Starting at the top, roll the dough toward you into a large log.  When it's all rolled, pinch the seam closed and turn the roll over so that the seam is facing down. Slice 1/2 to 3/4 inch slices and place them in the buttered pan(s). Allow them to rise for 20 minutes, then bake for 15-18 minutes or until nice and golden brown around the edges.

While the rolls are baking, making the frosting by combining all the frosting ingredients in the bowl of an electric mixer. Beat until fluffy, adding more milk if you'd like a thinner icing. Add maple flavoring, if using, and beat until combined. Ice rolls the second they come out of the oven. Sprinkle extra nuts over the frosting, then allow them to sit for 15 minutes before serving.